When Asus presented the Transformer concept last year I was really excited to see where it would end up. A tablet that could click in an keyboard dock that has a hinge. Effectively making it into an Android laptop/netbook which you can open and close just like one. The idea is quite simple and logical but none of the other Android tablet producers thought of implementing/designing it this way. All the other tablets that I saw at the time (which was only one year ago) only had static keyboard docks or wireless ones. That was the main reason for me to get the Asus Transformer in May last year when I was in NY. Sadly I only managed to get the tablet (32GB version) at the time since it was just launched and the keyboeard docks were either not in stock or sold out. I got the dock a few months later when I was in NY again as a birthday present from my sweet girlfriend Ana 😀

It was also perfect during the westcoast roadtrip since I could just use the tablet part during the day and in the evening in the hotels just click it into the dock and voila Andriod laptop for browsing, mailing, banking etc. When I got the Transformer it shipped with Android 3 aka HoneyComb (HC) and while it worked nicely you could see that Google just rushed that version of Android to the market so that hardware vendors could release some tablets since Android 2 wasn’t suited for tablets. The recent update to Android 4 aka Ice Cream Sandwich (ICS) is very nice and makes working with the Transformer a better experience. Eventhough you can still see that Google needs to do better to match Apple iOS 5 in terms of consistancy and all the apps being supported for ICS. Because that is the biggest drawback of Android in my humble opinion. Anyway, a lot of developments have been here on the tablet market the last year and out of all the vendors producing Android tablets I still think that Asus is the one with the most guts and being innovative. The Transformer Prime which is in sense an evolution of the Transformer like the iPad 2 was to the original iPad. And the interesting looking concept of the PadPhone.

Padwhat? PadPhone! The concept sounds relatively simple yet never done they way Asus is doing it. The PadPhone is an Android phone which docks into an tablet sized screen. When doing to it becomes a tablet, and when you get incoming phonecalls you use the stylus which comes with the tablet as an headset to call with. And then the last step is you can get a Transformer style keyboard dock to connect the tablet making it an netbook. All powered by the hardware in the phone, and he tablet and dock are just extending batteries and connection ports. Gonna definetaly take a look when it hits the stores to see if Asus has managed to pull the concept off. Only time will tell if the padphone will be as successful as the Transformer lineup but I do like what I see. Especially with Windows 8 being released this year it’s going to be an exciting year in the tablet world. Looking forward at the Lenovo Yoga Windows 8 tablet and see what that can do.

Then again … will tablets have a future when thin & light laptops, oh wait excuse me, I mean “Ultrabooks” are also getting more mainstream. In the meantime I’ll just happily use the Transformeron my daily commutes in the train for consuming content and some mailing and on holidays like now to have a 2 in 1 device. 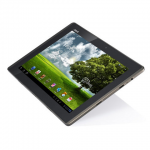 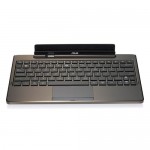 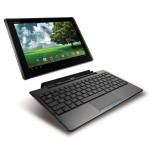